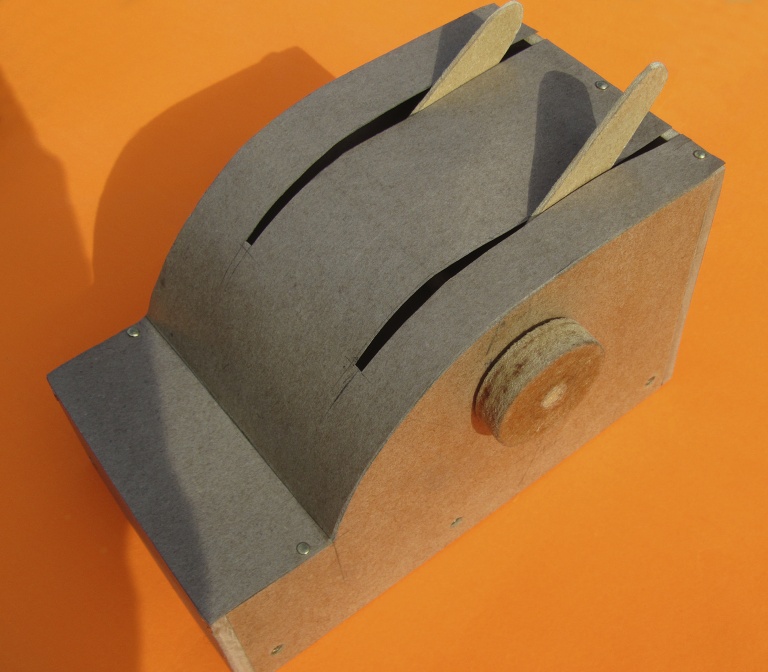 The throttle system for the boat's engine has now been completed, after considerable work the project's engine specialist, Ian Allaway. This is an all-mechanical system, which supplants the electronic 'fly-by-wire' throttle system that had some time previously been under development for the boat. The latter has not been entirely abandoned, but difficulties were encountered with it that led to it being shelved until a later stage of the project, when there is more time to devote to it. The intention is to run the boat with the all-mechanical system and only fit the alternative system if it can be proven sufficiently viable to warrant further effort.

The first component of the mechanical throttle system to be completed was the throttle-box, as pictured here in these first photos to be released, which also illustrate the mock-up Ian built before building the real thing. The throttle-box will in due course be installed on the left-hand side of the cockpit, close to the steering wheel. It was built from scratch, primarily from aluminium to reduce weight, with a combination of rivets, Allen screws and set-screws joining the components together. There are two levers extending from the top of the box. One is the throttle actuator while the other is the lever for opening and closing the engine's high-pressure fuel cock.

In addition to the aluminium parts, Ian used a variety of materials to create the box. There is a steel centre shaft, one bronze component, a white Nylon hand-grip on the high-pressure fuel cock actuator and a hand-grip made of a very hard black plastic material on the throttle actuator, plus a leather element internally which provides sufficient friction to prevent the throttle actuator moving when it shouldn't (the friction level can be adjusted with a knurled wheel on the side of the box).

Both levers are fitted with ball-bearings so they rotate smoothly around the centre shaft, and both have 'stops' that prevent movement beyond required parameters.

On the rear face of the box there are two swivel-joints, through which the cables for the throttle and high-pressure fuel cock pass aft to the engine compartment. The swivel-joints are among the few components in the throttle system that came ready-made, being from an aircraft type formerly in RAF service as a basic trainer – the Scottish Aviation Bulldog.

Ian's design skills and workmanship are very much in evidence throughout the throttle system, and abundant thanks are extended to him for his hard-working efforts. Ian – who has extensive experience with Spey and Viper aero-engines, among others, with a decades-long career in aviation behind him – took over several years ago from the late Graham Pool in helping the Quicksilver  project with the boat's engine installation,

Ian decided to make a mock-up of the throttle-box in MDF first, to check how the key internal and external components would go together. The mock-up was roughly a quarter-inch wider and longer than the real thing turned out to be, as ways were found to save a little space.

Now that Ian has completed the rest of the throttle system, we'll be publishing some more photos and information in due course to show you the full result. Some standard parts have been utilised in the linkages which connect the throttle-box to the engine – these being from the Scottish Aviation Bulldog and two other former RAF training aircraft, the Hunting Jet Provost and the Hawker Siddeley Dominie – but most of the other parts are bespoke.

Ian's first job, whilst a very young apprentice, was with a precision engineering firm in Gosport, Hampshire that made components for the BAC TSR-2 multi-role strike/reconnaissance aircraft. He joined the RAF as a propulsion specialist in May 1967 and was initially posted to the Royal Air Force College at Cranwell, working on Viper turbojet engines installed in Jet Provost T3 and T4 training aircraft. Then came a spell at RAF St Athan in south Wales on Rolls-Royce Avon turbojets for assorted marks of English Electric Canberras and Rolls-Royce Spey turbofans for Buccaneers.

Next came a posting to RAF Masirah in Oman in the Middle East, where Ian worked on Dart turboprop engines for Andover transport aircraft, followed by a return to St Athan to work on Rolls-Royce Olympus turbojets for Vulcan bombers, after which he left the RAF to become a civilian in MoD employment at Royal Naval Aircraft Station Fleetlands, working on Bristol Siddeley Nimbus engines for Royal Navy Westland Wasp helicopters and British Army Westland Scout helicopters.

He retired from the RAF in 2018, but keeps busy with various projects in the aviation and automotive spheres. He is pictured here testing the Viper engine in a Jet Provost T4 he helps maintain as part of a group of dedicated volunteers.

Images © Out of the Ordinary