If the heyday of British air-racing can be evoked by a single aeroplane, it is surely the Percival Mew Gull. It has a look that is quintessentially ‘of its time’ – with an economy of line simultaneously suggesting competitive zeal and genteel elegance. It is, to put it plainly, a combination of rakishness and charm no modern design could ever hope to match.

Predominantly of wooden construction and designed and built by Captain Edgar Percival, the type first flew in March 1934. It was produced specifically for racing and long-distance, high-speed touring. Slender, a single-seater, it offered no luxuries – only performance. A maximum speed of 265mph was claimed for a version powered by a six-cylinder, 205-horsepower de Havilland Gipsy Six engine. As races were won and speed-records broken, a legend was forged, and although the outbreak of war halted progress, further successes were notched-up in the years thereafter.

Of the six Mew Gulls built, one in particular stands out. Bearing the registration G-AEXF and splendid in white, it was flown by the celebrated race-ace and test pilot Alex Henshaw in numerous contests for the King’s Cup and other prestigious trophies, and on an epic record-breaking flight from England to Cape Town, South Africa and back in 1939. After covering the one-way distance of 6,377 miles only to fly straight back again, it is little wonder an exhausted Henshaw had to be physically lifted from the cockpit.

Several months later, with the Second World War entering its opening phase, the 'Golden Era' of competition flying in Britain came to an end.

The Mew Gull certainly challenged its pilots. Forward visibility was extremely limited, and they found it particularly difficult to see what was below them. Their biggest fear was flying into somebody. And having a tail-skid instead of a tail-wheel, the Mew Gull could only be operated from grass.

Today, more than 80 years young, G-AEXF is the survivor of several major crashes, innumerable hair-raising ‘moments’ and a spell of wretched neglect, but is these days safely in the hands of the Shuttleworth Trust at Old Warden airfield near Biggleswade in Bedfordshire. It flies on special occasions, much to the appreciation of visitors to the vintage air-displays that take place there each year. The sight and sound sooth all but hearts of flint.

From the moment the Mew Gull's wheels leave the ground there is magic in the air. 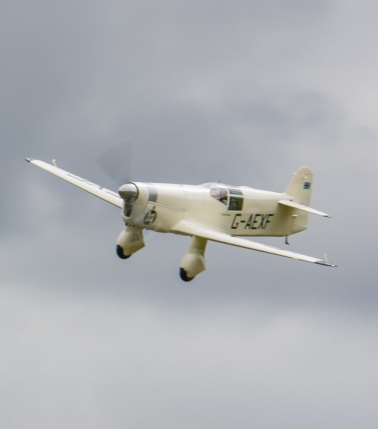