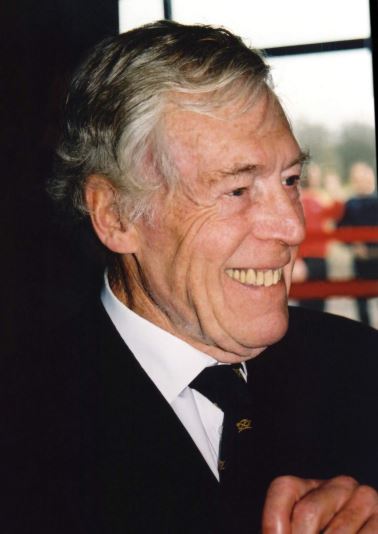 Becoming by unanimous consent the first Chairman of the Quicksilver Corporate Club, the project's official supporters' club, Ken was a tireless advocate for our bid to regain the World Water Speed Record for Britain. He took a central role in guiding the club's formation and early growth, attending every club event without fail.

During a distinguished career, Ken worked his way up the ladder of industry in the years following the Second World War, to finally head the chemicals division of the mighty Courtaulds empire. A Fleet Air Arm pilot in wartime, he flew Swordfish aircraft and was much-decorated for his daring exploits, but he was modest by nature and rarely spoke of those times unless asked. Ken's love of flying persisted well into his retirement, so that even after a heart attack he kept up his recreational flights with a safety-pilot by his side. That was invariably former Vulcan pilot Douglas Hawkins, who attended the inaugural Quicksilver Corporate Club event at Ken's behest and became one of its founding members, claiming membership number 006 – while to Ken himself, membership number 001 was granted in fitting recognition of his role.

In our photo he is seen at a Corporate Club gathering at the project's HQ at East Midlands Airport, clearly relishing chatting to club-members and hearing their stories. When not aiding the Quicksilver cause, he enjoyed retirement to the full. Woodworking, in particular, occupied his time, and the quality of the items of furniture he produced was of the very highest standard.

Speaking of him recently, Nigel said, "My memories of Ken Allen are of a larger-than-life personality whose enthusiasm for Quicksilver  knew no bounds. He set a tone for the Corporate Club that really endured. Years after his passing, he remains part of the fabric of our project.

"Small in stature, colossal in character, he would grab a waste-paper bin, upturn it, then stand on top of it to raise his height above the throng at the early gatherings of club-members – explaining to them in impassioned tones that by becoming part of the club they could, 'Stretch out and with tips of fingers brush the hem of history'.

"He had that dimension of putting it inspiringly. No-one who was there will ever forget him."